I'm not really sure how this happened, but about a month ago, I was given the responsibility of being the Ambassador's control officer for a visit she would be making to Leon, a city about 90 minutes from Managua.   I say that I'm not sure how it happened, because I'm a consular-coned officer in a consular assignment, which means I spend most of my day interviewing Nicaraguans who are applying for non-immigrant visas and Americans who are renewing passports, applying for a Consular Report of Birth Abroad, jail visits, etc.  Coming into this job, I really did not expect to interact with the Ambassador any more than a "Good morning / afternoon, Madame Ambassador" if I saw her somewhere on the embassy compound.  I really thought that the folks in Political had a lock on her time.  Wrong!!!  Ambassador Powers is really committed to giving entry-level officers (ELOs) opportunities to develop their careers and skills outside their cone, and it seems that includes all ELOs, not just the folks in POL.  So, when I was given the task of pretty much setting up her schedule for the day, I was a little freaked out.  I figured I'd be in for a long, stressful day, and while I was right in some respects (long day), it wasn't nearly as stressful as I had expected, and I learned a lot about the pre-planning and choreography that goes into getting an Ambassador from one place to the next while staying on schedule and being mindful of security.  It's really a weird sensation to be part of an entourage, and I can't imagine getting used to it.

I'm also beyond impressed with the Ambassador's energy and her obvious desire to experience Nicaragua and get to know the Nicaraguan people, while at the same time reaching out to the American citizen community here.  The day started early and was pretty much choreographed down to the minute.  We visited the headquarters of the American Nicaraguan Foundation, which works with donors to provide educational, medicinal, and food supplies to some of the neediest communities in Nicaragua.  We also visited a school that ANF supports--and this was BY FAR the highlight of the day.  The kids had a program planned that included two traditional dances, and the presentation of some Nica handicrafts and flowers. 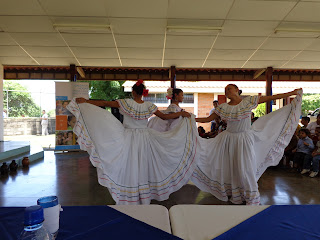 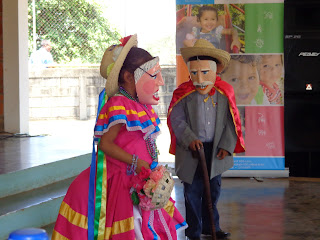 El Viejo and La Vieja: a traditional dance where old man chases his old wife around trying to get some sugar.  Another explanation is that he's trying to get sugar from the ladies in the audience and his wife starts chasing him around.  Pretty funny when performed by 5 year olds.
And by sugar, I don't mean sugar.

One of the school administrators asked if the Ambassador would have her picture taken with some of the children--and the whole school gathered around.  It was definitely one of Lifetime network moments--I'm a pretty crabby old hag, really, and I thought I would cry from the sheer cuteness of it all: 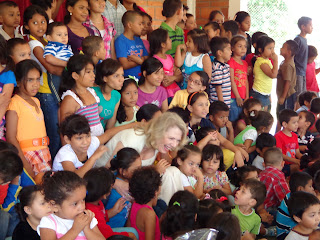 Then it was off to lunch--but this was still a working event, in a way.  The Ambassador likes to get to know the Peace Corps Volunteers who are in Nicaragua, so whenever she does visits like this, she invites the PCVs in the area to lunch, her treat.  We had lunch with five young women with pretty amazing and diverse educational backgrounds, personal histories, etc., and learned a lot about what they are doing here....education, health, small business, agriculture, etc.  After lunch, it was off to a Town Hall meeting for American citizens in the Leon area, followed by a visit to the home of family hosting / housing one of the PCVs from lunch.  It was really a treat to see the Ambassador visiting an average Nicaraguan in her own home, and being completely at ease, as well as putting the host at ease.  Then we went to visit one of the local organizations that the PCV works with, where, among other things, girls are learning to make crafts from recycled garbage to sell as souvenirs.  Once again, I got to see the Ambassador engaged with a group of young girls who were obviously nervous, but excited to be meeting the Ambassador and telling her about their projects.  I also learned--as the Ambassador told this group of girls while a group picture was being taken--that the secret to looking good in a picture is to say "diez y seiz, treinte y tres".   According to the Ambassador, it's what Colombia beauty pageant contestants say during photo shoots--and it was the kind of story that made these girls giggle and smile, and showed them (and me) that the Ambassador is a regular person who can tell funny stories and make you laugh.

We finally made it back to Managua in the evening--thank god the Mini-Menace had been invited to play with a friend and go to a party after school, so even though I worked later than usual, I still beat him home.  Now I'm planning on enjoying the three-day Labor Day weekend and rubbing it in to the Mini-Menace that he still has school on Monday.  BWAH HA HA HA!!
Posted by The Red Menace Abroad at 1:30 PM