The 30 second summary of my summer:  the Mini-Menace spent the summer in the US, the first month with his father and paternal grandparents, the second month with my family, and then a few days in DC to visit his buddies, winging in back to Managua just in time for the start of 5th grade.  He had a blast: road trip with Grandpa, visits to Amish country, baseball games, water parks, and generally all the things a 10 yr old boy loves.  Me, I had a busy, but surprisingly sedate summer:  working crazy hours at the Embassy on the 4th of July event--where I was the control officer for the Nicaraguan VP--, organizing a Town Hall in Managua a few days later, accompanying the Ambassador to a few meetings, traveling with her to Bluefields for another Town Hall, and generally keeping myself busy visiting Americans in jail.  I did manage to go horseback riding a few times: about 30 minutes away, there's a farm owned by some expats, and for $50 / month, you can show up whenever you want, as often as you want, and go riding for as long as you want.  Finally, my 12 year old self's dream has come true: it's like owning a horse without having to do all the work.

Now the Mini-Menace is back, 5th grade is underway, and today, we got to experience one of the biggest events in the country: the feast of Santo Domingo de Guzman.  The celebrations started on August 1st, while we were still in the US, but we managed to make it back in time for the closing celebration on the 10th.  One of my co-workers invited us to watch the parade from a cousin's house that is right on the parade route.  We'd be behind the fence, not crushed by the crowd, and we could sit, eat, dance, and generally get our party on, Nica-style.

The parade--in which a roughly 6 inch statue of the saint is taken from one side of Managua back to his home church on our side of town--is akin to Mardi Gras, complete with bands, dancers, panhandlers, drag queens, and the like.  People set up tables and chairs in their yards, and wait for the saint to pass by.  There are people who walk the procession in gratitude or in supplication to the saint, asking for his intercession on their behalf, or giving thanks for prayers answered.  Many people carry or wear their own altars and make their own walk ahead of the "official" saint's procession. 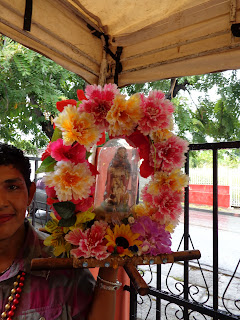 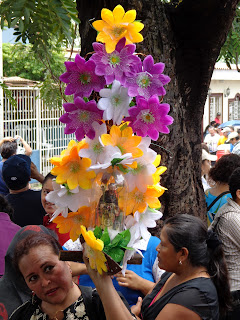 Other people coat themselves in used motor oil to darken their skin; there are different theories as to what they represent: diablitos, or little devils; the descendants of African slaves; or the indigenous Nicaraguans that populated the area when the saint was first found, who made a living by making charcoal (or something like that), hence the dark skin. 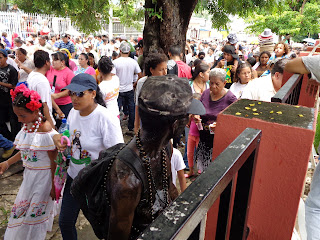 There were also quite a few people dressed as Indians; they walked the route, usually following a band.  Houses along the route would pay the band and dancers--money or food--to perform for a little bit at their house.  Our hosts did just that, so we were able to enjoy some great Nica music and dancing. 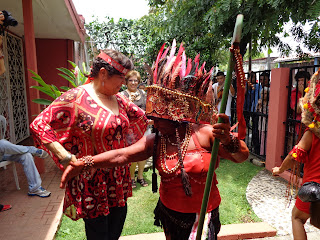 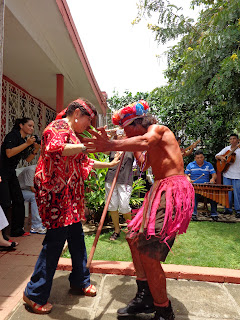 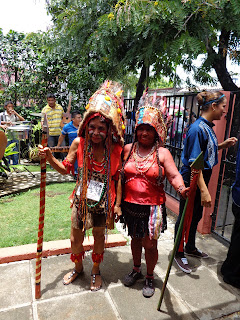 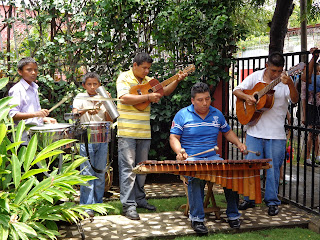 We watched the crowd, all dancing, drinking, partying and carrying on.  These pictures really don't accurately capture the size of the crowd.  Suffice it to say that I was very glad to be behind a fence, with a little more room to breathe. 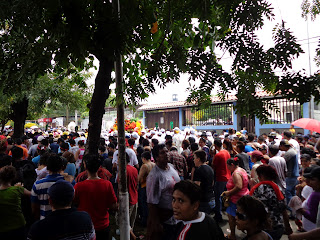 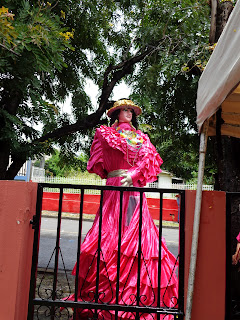 Finally, Santo Domingo made his appearance, surrounded by flowers and carried on a massive wooden platform carried by what seemed like a sea of celebrants: 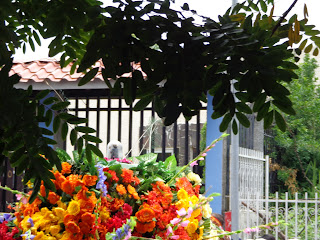 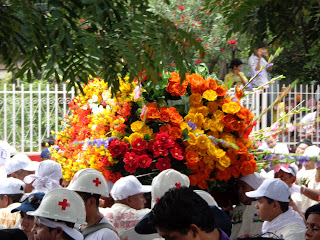 Our hosts also put on a traditional Nica spread, called caballo bayo.  It's like a buffet of traditional Nica meats, cheeses, salads, sauces, beans, and desserts.  It was insanely delicious. 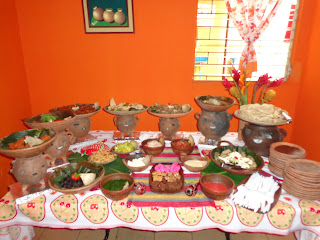 Now, I'm going to be in a food-induced coma on the couch for the rest of the day. Good times!!!!

Posted by The Red Menace Abroad at 6:42 PM