Attack of the Zombie Sock Monkey!!!

We knew we'd be arriving in Managua two days before the Embassy's Halloween party so of course the Mini-Menace insisted on packing a costume in our luggage.  He'd been begging for a Zombie Sock Monkey costume this year, but I had terrible luck finding one.  Beebop (aka my mom) came through once again and saved the day, buying and mailing the costume to us before we left.  Here it is in action: 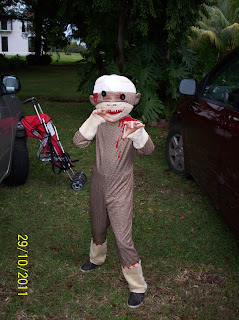 Definitely a little gruesome, but oddly cute at the same time.

The party was a lot of fun; we had our first trunk-or-treating experience--people really went all-out decorating their cars, adults in costumes, and tons of candy to be had.  Although we rapidly learned that chocolate candy--the mainstay of my Halloween diet--is something of a rarity here.  I suppose it might be because of the temperature and the ease with which milk chocolate melts. At any rate, the few people who'd gotten their hands on chocolate candy to hand out were mobbed, and not just by kids.   After the trunk-or-treating, the Marines hosted a pizza party (with a DJ), haunted house, and chili cook-off, all at the former Ambassador's residence on the compound, locally known as Casa Grande.  It's not so much a big house as it is a mansion.  It's not occupied; the Ambassador (when we have one) actually lives in a smaller, less opulent house elsewhere, but Casa Grande is still used for official functions, etc.  It's gorgeous, and we really enjoyed getting to celebrate Halloween in such comfortable surroundings.

I still missed trick-or-treating in my sister's neighborhood, though. People sit out with coolers of beer, fire pits, and regularly hand out FULL SIZE CANDY BARS!!!!!!  All in all, though, this was a very good alternative, and a great way to jump right in to the Embassy's social scene.
Posted by The Red Menace Abroad at 12:46 PM