My Dad reminded me that it's been a while since I updated the blog, so I'm going to throw just pics up and just give you a quick summary.

After 102 days, my HHE finally arrived on Friday:  120 boxes, and I'm  happy to say that at 7 pm on Sunday night, I'm pretty much unpacked.  The house smells like a cardboard box factory, though.  For my first international move, this has been a pretty positive experience.  Nothing was broken!  Nothing went missing!  In fact, things came that should have gone to storage.  So now I have a porcelain Christmas village to store for the next 2 years, plus a box of winter clothes.  Yeah, those winter running tights and the snowboarding pants are not going to get much use around here.  Still, I guess it's not a bad thing to have a few long-sleeved shirts and sweaters around, for when we head to Cleveland next winter. 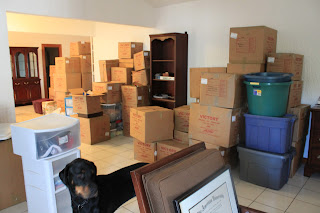 I'm not sure why I thought I'd want my college diploma, though.  Or why I brought 2 rakes, 2 shovels, and an electric weed-wacker / trimmer, 'cause Lord knows *I'm* not doing any gardening around here.  I also discovered that I apparently own a really nice table saw.  That should tell you how often I actually went into the tool shed at home.

But the HHE gods were smiling on me, because the last boxes that the movers brought in (last in, first unpacked!) contained this: 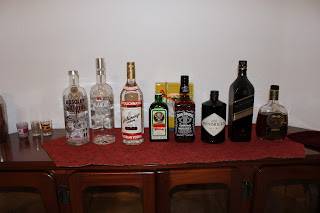 The wine took a little longer to find, but eventually I did find it and showed remarkable restraint by waiting until I found wine glasses to start drinking.

Nicaragua seems to be a pretty popular destination for friends from home; in three months, we've had three visitors.  And all of them have shown up with alcohol...the first (a family) brought Finlandia and a bottle of Johnny Walker Double Black, the second brought a coffee & almond flavored Absolut, and the most recent brought a bottle of my favorite sangiovese...and bagels!!  Believe me, those bagels are worth their weight in gold--all you can get down here are the frozen-in-a-bag-at the-grocery-store kind.  Blech.

The 2nd visitor is one of my closest friends; we met at work a few years ago; I like to say he's the older brother I never wanted.  He cruised around Nicaragua with a guide for the few days  he was here, but I managed to take a day off and we went sandboarding at Cerro Negro.  I realized that 3 months of not running has made me weak--the hour-long hike up the volcano just about did me in.  The ride down was a lot of fun--not nearly as scary as I thought it would be, given the steep hike up.   We also cruised around Leon, an old colonial city with a beautiful old cathedral. 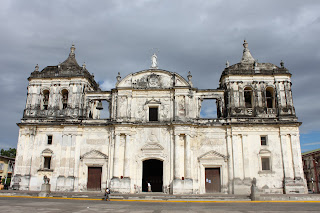 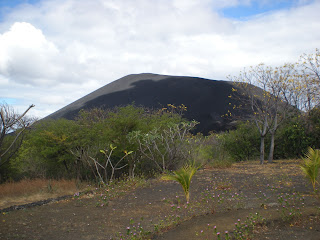 We also went to the Laguna de Apoyo to spend the day swimming at a place called San Simian.  It's definitely off the beaten path (literally!  A couple of km down a dirt / gravel road, and I was starting to hear banjoes, or whatever the Nica equivalent would be).  The lake is gorgeous, and there was a great dock, a catamaran, kayaks, and inner tubes for us to use.  There's a small bar and kitchen on site, so you can just eat, drink, swim, or just nap in a hammock all day.  You can spend the night in these little rustic cabanas, which I'd love to do the next time.  Maybe when the Parental Menaces come to visit in April.... 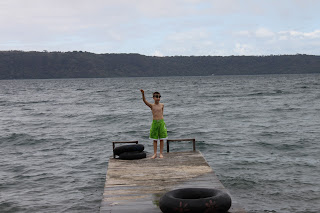 Now, the Mini-Menace and I are kicking back, watching the Super Bowl.  My best friend is from NY, so we're cheering on the Giants; this is the first time the MM has sat and watched the SB, and he's enjoying the commercials and the half-time show.  He can't believe Madonna is 53, though. Just wait 'til you see her close up, kid.

And on that note, folks, I'm outta here.  Btw, Dad, I'll post more often if you leave a comment once in a while.  What goes around,comes around :)

Posted by The Red Menace Abroad at 8:46 PM