The kindness of strangers

The concept of DOS and the FS as a community / family really hit home for me this week.  Ever since A-100 began, I've been stressing the F out over what I was going to do with the Mini-Menace once we arrived at post.  I hate to harp on the single-parent thing because, god knows, there are countless other single parents (or doubles, to be honest) who have it so much tougher than I do.  But I had no idea what I was going to do when I got to post and had to go to work, but at the same time, had to figure out school transportation and after-school childcare until I was able to hire someone.  (And that is a whole other issue, the concept of hiring a domestic employee is so foreign to me that I feel incredibly guilty about having domestic help).  Anyhow, to get back to my point, the woman who runs the Welcome Wagon group at post put me in touch with a family there whose kids attend the same school that the Mini-Menace will....and without having emailed / spoken to me, this family offered to take the MM to / from school and to watch him after school until we get settled, help me get him enrolled at school or or anything else that I needed help with.   Amazing.  I'm so much more relaxed about the move now, I can actually be excited about the move.

So excited, in fact, that the MM and I are headed down to Managua next month for a quick bombing run of a trip.  We're just going down to visit his school / take placement tests, and get him officially enrolled.  Ok, and *maybe* we'll be taking a day to do a little sightseeing--but I think it will help his transition if he can visualize where he'll be going to school or if he has a better idea of what he can expect.  So expect some actual Managua-related posts & pictures next month!

And the vehicle dilemma has been resolved....the poor hybrid Highlander is officially dead and we are now the proud owners of a bitchin' Jeep: 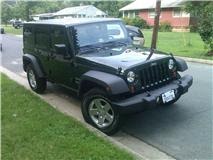 Posted by The Red Menace Abroad at 8:35 AM